Recent events have proven the current decade to be among some of the most brutally challenging times. Coming out of a global pandemic, battling an urgent climate catastrophe, and living through a spiralling conflict in Ukraine at the nexus of great global powers are some of the threats looming over current generations.

However, even at the mouth of such adversity, there are lessons to galvanize future generations to act differently and better. Central to those reflections is the importance of instilling and embracing the transversal emotion of “hope.”

The ability to remain hopeful in the most adverse situations is a distinguishing characteristic that has propelled the best examples of leadership, resolve, resilience and adaptability. Because hope leads to action, it stimulates remarkable responses from ordinary people in extraordinary situations.

How hope creates purpose for leaders

All tragic circumstances challenge us to re-engineer how we think. Distress can force us to dig deep into our psyche to act morally and leverage our influence for the greater good. This behaviour can hold whether you are running a country, business, or campaign to save the planet because hope creates a sense of equilibrium and purpose.

Recently, the power of hope has been seen in practice, with people driven by a common cause, new communities emerging and leadership being redefined.

The leadership paradigm is an interesting example as new styles are unravelling in real-time as new and challenging circumstances unfold through voices carrying messages of hope.

It is not just what is being said, but how, to whom and where.

Arnold Schwarzenegger’s viral “tell the truth” video and message to Putin after the war in Ukraine broke out is a prime example. The lines “There are things going on in the world that have been kept from you, terrible things that you should know about” proved a powerful and straightforward narrative that stopped the world in its tracks.

The lesson from such examples is simple: step up and use your sphere of influence to provide hope; be authentic and unafraid of taking an unconventional approach.

Hope in the face of adversity

History has taught us that hope is deeply anchored in the human experience even though crises can, at their worst, deprive us of this sense of trust; dire prospects and uncertainty can drive humankind into spiralling negativity.

Look back to the Second World War. The underlying strategy was to ruthlessly crush civilian morale so that those being bombarded would abandon their hopes and fighting spirit. Although many buildings were destroyed and the bombing claimed countless victims, hope remained on both sides of the front line. Bombings soon became part of people’s daily reality.

When hope takes a solid hit in times of crisis, people can feel overwhelmed by feelings of being powerless and losing control over their lives. At that moment, solid leadership is urgently needed to keep hope alive.

That leadership could be as simple as the younger generation rising to give older generations a sense of belonging and hope for the future.

During the pandemic, we looked to world leaders to provide that hope and some did this better than others. Honesty, empathy and an ability to make an emotional connection were common factors among those who succeeded. 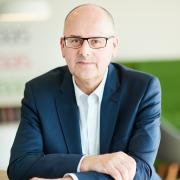 History has taught us that hope is deeply anchored in the human experience even though crises can, at their worst, deprive us of this sense of trust...

Bart De Smet, Chairman of the Board, Ageas

New Zealand Prime Minister Jacinda Ardern, for example, showed the critical need for quick action with authority and the power of making human connection that was a call to action and message of hope. That response engendered a level of support unseen in most political leaders.

Hope for our planet

Hope and, to a certain extent, fear drive a renewed determination to do the right thing for the planet, even though progress seems slower than the urgency needed. People have an innate desire to evolve and develop and not just survive.

When Sir David Attenborough spoke to world leaders at COP26 (United Nations Climate Change Conference, Glasgow, 2021) on the perilous state of climate change his words resonated due to his authenticity, passion and ability to convey urgency through powerful storytelling. His words on whether it was too late to stop climate change – “If working apart we are a force powerful enough to destabilize our planet, surely by working together we are powerful enough to save it” – is a message of hope for humanity that inspires action.

People subconsciously want to create their legacy for something good. The impact of actions is not always immediately apparent, however. Eventually, everyone will have made at least a small difference in the world.

By maintaining and promoting a sense of hope, we will all be compelled to play our part in bigger challenges. At the macro level, these changes bring about not only stability and predictability but also growth, well-being and prosperity.

The combined efforts of business and civil society are extremely underleveraged, undervalued and underestimated. A lot of companies are inspired by the 1% Pledge, introduced by Marc Benioff from Salesforce. The Pledge is based on a simple idea: leverage technology, people and resources to improve communities throughout the world.

Salesforce calls this integrated philanthropic approach the 1-1-1 model. This means Salesforce dedicates 1% of its revenue, 1% of its services and 1% of its employees' time to give change and growth an impactful boost in their immediate environment. Over the past 20 years, Salesforce has given more than $240 million, 3.5 million hours of community service and provided product donations for more than 39,000 non-profits and education institutions. Moreover, Salesforce inspired many other companies around the world to do the same.

Both in and out of a crisis, it is our moral duty to turn hopeless situations into hopeful ones. That’s leadership and we’re seeing it play out in many forms: through world leaders and simple community gestures.

An important lesson for all aspiring leaders is to step out of the shadows in tough times and away from the path well-trodden to be brave to embrace a message of hope to lead others beyond their deepest fears.

Sustainable public-private partnerships: Ageas and FEB reach out to the government